This project won 2nd place in the urban planning competition for the restructuring and redevelopment of the Place Paul Jomé in Hesperange.

Since the 90’s, the road from Thionville (N3) which crosses Hesperange and continues towards Luxembourg-city, represents a strong air and noise pollution. In the medium term, once the new N3 is in service, the traffic on the route de Thionville will be considerably reduced and the road layout can be reviewed.

A first phase of restructuring of the Hesperange center has just been completed. The connection between the two banks of the Alzette has been reinforced by the widening of the road bridge and by the installation of a pedestrian bridge at the place of the old Roman bridge. The Paul Jomé Square project will continue this positive development.

The land to be developed has a size of about 1 ha and is located halfway between the church of Hesperange and the new town hall. The study area of the development is limited by the Itzegerbaach to the south, by the route de Thionville to the north and east, and by the Hesperange park to the west.

The project forms a continuity with the pedestrian development on the new bridge. The Paul Jomé square is located within an island formed by the volumes of the buildings around it. It is thus protected from traffic nuisance. The form of the buildings creates both a partially enclosed centrality and open, fluid outdoor spaces.

The square is structured in two sequential spaces. The mineral part, located at level 265 and overhanging the parking lot, opens towards the center of Hesperange. The vegetal part connects the site to the park by a topographic shape. The green space of the central park enters the space of the square on the east side.

The specific identity elements of Hesperange, such as the castle, the church and the Alzette, are “framed” by the project. Its position and its composition give the status of new centrality of Hesperange.

On the north side of the square, a restaurant facing the sun from midday is set up. This user-friendly function, sheltered from traffic, helps to activate and energize the square.

On the south side, Place Paul Jomé reaches Place du Parc, which forms the link with the relaxation area on the banks of the Alzette and the park. It is a multipurpose space for rest and meeting, which can also take the form of an amphitheater for all kinds of shows. The landscaping follows the topography of the site.

The project provides for the integration of soft mobility. The existing network of bicycle paths will be expanded. The pedestrian is also in a privileged situation in a space free of motorized traffic. The bike and car sharing stations are located to the east, near the transit hub. This area is protected from the weather by a large canopy that serves as a shelter for passengers. A bicycle bypass provides access to the square via a ramp.

The project also adapts the number and distribution of parking spaces. Given the availability of alternative means of transportation on the site, it is suggested that a portion of the underground parking spaces be progressively vacated and made public. Some parking spaces may also be allocated for bicycle parking. This would be an attractive feature for the inhabitants of Hesperange and would encourage them to limit the use of the car. The parking lot is accessible from the Paul Jomé square by a staircase/lift.

The “Am Keller” interchange is located at the intersection of the route de Thionville and the rue de l’Alzette. Three platforms in the direction of Luxembourg City and two in the opposite direction will receive a large number of passengers every day. They change buses mainly on the same platform and will therefore not have to cross the road.

Bicycle traffic is completely separated from bus stops. The awnings of the businesses can be used as bus shelters on the south side of Thionville Road. The advantage of this separation is that passengers can get off the bus without the risk of a collision or accident with a bicycle. Bicycles travel within the island without the risk of being hit by a bus or other motorized vehicle. 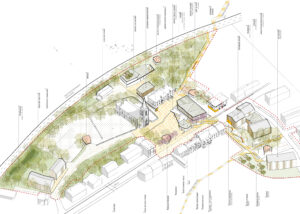 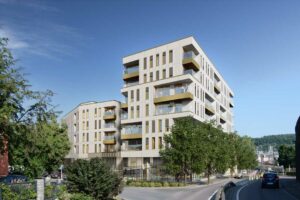 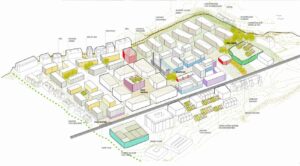