BrauHotel in Bascharage, a hotel with 55 rooms covered with a facade of terracotta strips.

Just across the street from the Brasserie Nationale production site, at the intersection of Avenue du Luxembourg and Boulevard J. F. Kennedy, is a new hotel with 55 rooms spread over four floors. It benefits from a good visibility on one of the main traffic axes of the south of Luxembourg. Inaugurated on the occasion of the cultural year Esch 2022, De BrauHotel is a showcase for Bascharage and for the site of the National Brewery.

In order to make it visually lighter, the building has been separated into two blocks. It creates a relief effect because the rods have different depth and color tones.

A black metal frame accentuates the openings in the facade; the rhythm of the floor windows is repeated with a set of dormers to the sloping roof surfaces. The rooms in the roof have a particularly friendly character.

The originality of the dormers is emphasized by their lightness, as if they were floating above the volume of the roof. The black zinc roof allows to assimilate the technical aspect of the photovoltaic panels.

The hotel has an underground parking lot with 50 spaces on two levels and 18 outdoor spaces. It targets both professional and private clients. Different types of rooms from 18 to 36 m2 are offered: single and double rooms (36), as well as family suites (19, 3 of which are accessible to people with reduced mobility). The ecological interior finishes have been carefully chosen. The access to the rooms benefits from the simplicity of the interior circulation, organized around a central corridor and a stairwell.

A specific effort has been made to integrate the technical surfaces in the attic and in the basements. In the same context, the ventilation grids have been integrated into the aesthetic language of the ensemble.

The hotel complements the existing demand and supports the development of tourism in the south of the country, marked by its industrial history and multicultural character.

Hotel guests can take advantage of a breakfast service and a coffee bar, as well as a restaurant across the street. A workspace is available all day. A cosy beer garden terrace invites guests to relax directly in front of the hotel and creates an attractive spot in the center of Bascharage.

Overall, the project was designed and conceptualized to accommodate guests in a brewery atmosphere, as an extension of their experience after visiting the National Brewery production site across the street. 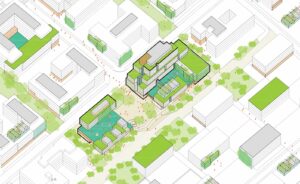 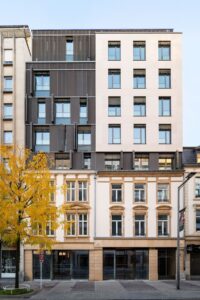