School building in the form of an elongated bar with expanded metal sheet cladding that sits on two plinths made of gabions.

A new school building was built in Mertert-Wasserbillig, housing 15 classes from cycle 2-4, a crèche, a media library, a production kitchen with a canteen and an air cushion trampoline (Airtramp).

The school with its three levels is characterised by its elongated slab which rests on two massive gabion plinths. The coloring of the expanded sheet metal cladding gives dynamism and lightness to the volume of the building. In contrast to the lightness of the bar, the plinths are clad in regional stone gabions.
All 15 classrooms with their large bay windows face north-west. The corridors located on the south facade are served by the large main staircase.

Access to the kindergarden is in the south-west plinth. Parents can enter with the stroller as far as the reception area, before joining one of the six rooms. A room in the basement, directly accessible by lift, allows strollers to be stored during the day. Each of the six rooms of the kindergarden is equipped with a sanitary area, adapted to the age of the children. The kidnergarden operates independently of the school. The only link between the two entities is through the media library on the ground floor.

The media library welcomes on two levels the pupils of the school as well as any interested citizen of the commune. Outside school operating hours, the media library can be accessed independently through the entrance hall.

The northeast plinth houses a production kitchen for 500 meals. Apart from meals for the kindergarden, most of it is intended to be delivered to other sites in the municipality.

Three refectory rooms are on the side of the playground, to the northwest. Together with the semi-enclosed courtyard, they can accommodate activities in rainy weather or in winter. The 3 rooms as well as the courtyard are equipped with stackable mobile partitions, offering maximum flexibility in use.

At the northwest end are the air-cushioned trampoline room and themed rooms, such as a educational workshop and kitchen.

The building is made of mixed wood-concrete structure. This choice of system allows fast and efficient execution while meeting the insulation requirements of a building in A-B-B energy class. With a view to a possible future extension, the south facade can be dismantled and a second grid of classrooms added. 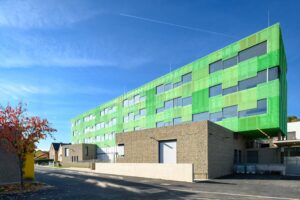 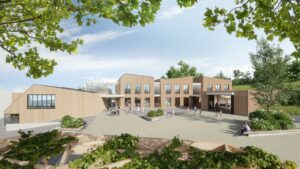 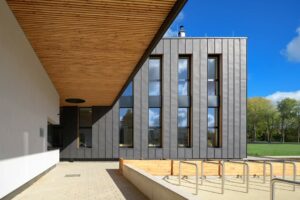