The former industrial wasteland of the Polvermillen offers the unique opportunity to create a new, sustainable and welcoming urban district within walking distance of the city center of Luxembourg.

The former industrial wasteland of the Polvermillen offers the unique opportunity to create a new, sustainable and welcoming urban district within walking distance of the city center of Luxembourg.

While the Polvermillen neighborhood had about 300 residents at the time of the studies, the project will triple its population by 2024. This new development will consist of 230 new residential units, as well as 2,000 m² of office space and space for local shops.

The urbanistic themes are multiple:

The buildings that will be restored come from different periods and bear witness to the activities carried out on this site during the last centuries.

The relationship with the existing neighborhood

The existing buildings adjacent to the site are located on a steep slope. The size of the houses is small. In response to this, the proposed buildings along the Bisserwee are single-family terraced houses 6 to 7.5 meters wide. Their visible elevation on the Bisserwee is limited to 1 story and the scale of these houses is similar to the existing.

The project provides for voids and visual axes between the volumes. These will allow for cross-sectional views and recognition of old site features.

At the entrance to the Polvermillen site, about 30 public parking spaces are planned, available to the entire neighborhood.

Respect for the natural environment of the site

On the eastern, southern and western edges, the urbanized area is surrounded by a natural green space. It is made up of woody vegetation of succession that surrounds the Alzette. Downstream from the Alzette, the banks will be developed as flood compensation zones. Rainwater from the site is evacuated through open-air retention basins. These spaces are amenity spaces that can also be used by local residents.
The development of these banks will be done by a dry stone masonry. These walls will provide a living space for lizards and other insects.

Due to its proximity to the city center (Grund elevator at 10 minutes walking distance) the project lends itself to the development of soft mobility.
Parking spaces are limited in number and grouped in a single underground parking deck. There are also bicycle parking spaces available for residents.

The central square is the transition element between motorized and non-motorized traffic. The square is a meeting place and a place of relaxation for the inhabitants and residents. Around this space are planned activities of the tertiary sector, local shops, medical offices as well as a concierge service.

The arrangement of the buildings parallel to the air flow of the valley allowed for the development of cross-cutting open spaces. These spaces can be private, semi-private or collective. They provide accessibility to the buildings, allow for transverse views, create private rest areas, as well as collective meeting spaces connected by walking paths.

Relationship between public and private space

On the first floor, there are accommodations that are in direct contact with the public space. The transition is made either by a small private space or by a slight raising of the level in relation to the public space.

Rational use of building land

The project foresees the reconversion of a brownfield site with a ground sealing coefficient of 100% into a green urban space. In order to free up as much green space as possible on the site, the choice was made to densify the constructions on a part of the parcel with buildings of 2 to 4 floors.

In addition to the classic typologies – studios, apartments, penthouses, large “loft” apartments will be built in one of the industrial buildings. Depending on the building, the sizes of the different types of apartments vary to allow for a wide range of residents to live in this neighborhood. Finally, about fifteen semi-detached single-family homes are developed along the bike path. 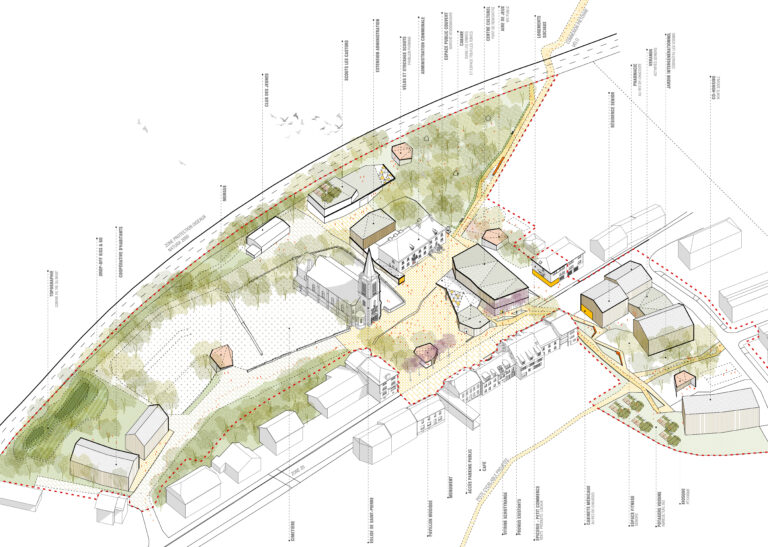 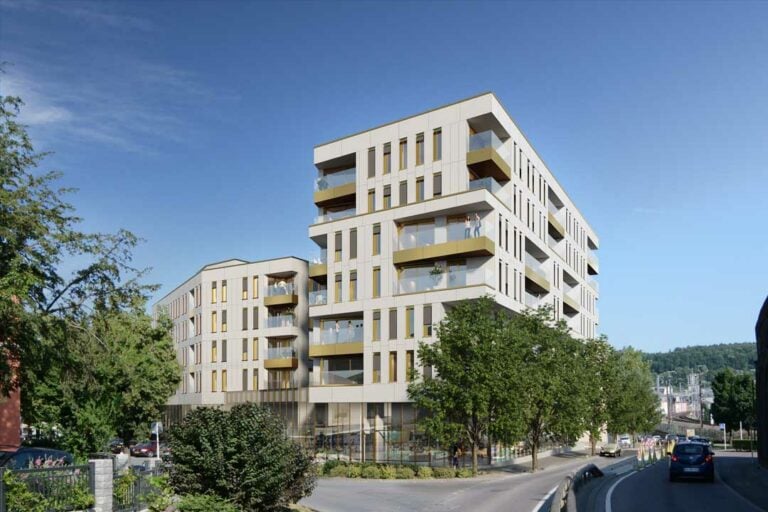 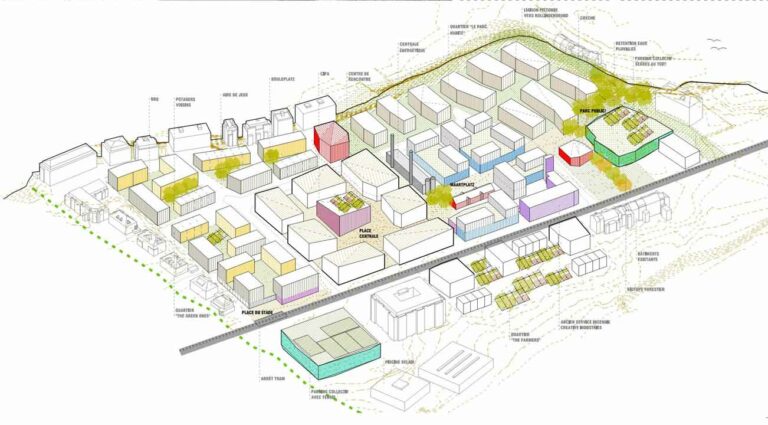